Positioning Puma, the sponsor of half of the African teams to make the most of the FIFA World Cup

SOLUTION interviewing players we learned that consumers’ perception of Adidas and Nike’s was strikingly similar: the tough American/German coach driven by success with an almost militaristic approach discipline (just do it/impossible is nothing). Puma on the other hand was seen as more easy going, the coach that reminds you to have fun.

Semiotically, Nike and Adidas have both, for years, been using the language of Duty as the path to Glory (much as “the few, the proud, the Marines“). By talking to players we learned that all that hard work is just the cost of entry for any competitive endeavor: after that, what makes the difference is how much you enjoy yourself, how much you love what you do.

Like our competitors, we decided to tap into the Belonging instinct that rules team sports. But instead of insisting on the cost of entry (fulfilling a duty), we claimed Love, its chemical reward,  awarding Puma the emotional high-ground.

RESULTS brilliantly executed by Syrup, the Love strategy became a viral sensation giving Puma more visibility than Adidas -the event’s official sponsor- in the weeks leading up to the World Cup. 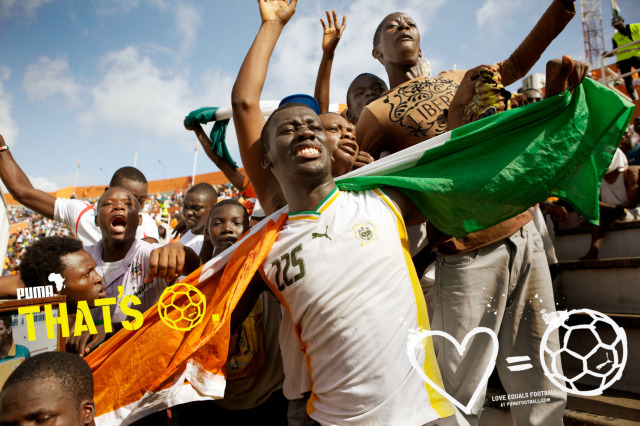 Even after agencies changed, the brief kept paying off and lead Droga5 to Cannes Gold.

Imitation is certainly  the highest form of flattery: today there are no fewer than 3 agencies and a dozen portfolios claiming credit for this work. If you encounter them, ask them about it. It’ll be fun.